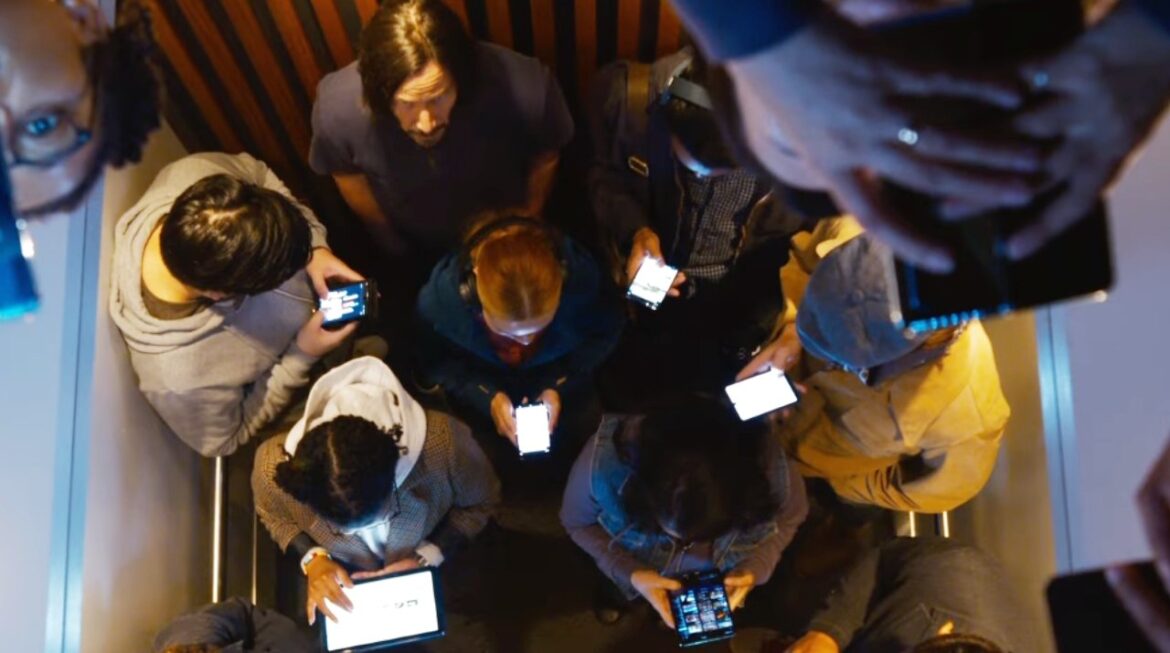 I have had dreams that weren’t just dreams.

– A glimpse of Matrix Resurrections

Keanu Reeves is back! The Matrix franchise has always used technology at its best to depict how humans are evolving, and we could become Gods with the power of computing. It is all about bending reality. The Matrix movie in the year 1999 has become really nostalgic!

The words uttered in the trailer really mean something to all of us. We all had dreamt of technology, and those dreams have become real.

“People who are crazy enough to think that they can change the world, are the ones who do.”

Do these words resonate? Yes, you guessed it correctly. Now I am coming to how Apple brought Matrix Resurrection to our pocket.

Apple’s iPhone has not only changed our world, but it has changed other worlds too with its launch in 2007. Back then, in 1999, we realized the potential of technology, but we could not see that we had it coming. What could we not foresee?

There is a short one-second scene that shows people glued to their smartphones when Keanu was in the elevator. This seems a little frightening as this is what our world has become. You can now date a girl through your smartphone!

Now what is the role of Apple here?

Rian Johnson, the director of “Star Wars: The Last Jedi” and “Knives Out” revealed that bad guys could not use iPhones. Even soft drink companies do not allow their soft drinks to be thrown into the trash! Is this surprising?

Apple has top-notch security features when compared to Android. This is what Apple wants to show you. Rian remarked jokingly that he would be murdered for making the mistake of filming a bad guy with an iPhone.

Bad guys carry Android. Even in the Netflix “Daredevil”, you could see an iPhone in the good lawyer’s hand. You will see an iPhone with good people in every movie. This is also how Apple markets its products. Could you tell what the guys are carrying in the trailer? Android or iPhone?

The elevator scene in Matrix Resurrections is no different. A sheer number of people are using smartphones. Now from the phones that they are glued to, what can you defer? Of course, you have become a detective now, mate!

The 1999 movie had a Nokia phone which was used by Neo. That movie was a depiction of future. The irony is that the manufacturer is gone as good as the phone.

If you are using Mac, Quicktime player needs no introduction. We can easily watch Netflix today thanks to Apple’s technology of Quicktime back then in 1999. This really made Microsoft envious when spoken of ‘Knifing the baby’- which means to kill a newborn project!

Despite Microsoft’s efforts to discontinue support of Quicktime, Apple went on to work on the project. With the Star Wars trailer released in 1999, this technology became a success. It changed the way you would view a theatre. Steve Jobs called it the most significant download in history, with the trailer being downloaded 3.5 million times in the first five days. In short, Matrix resurrections owes its

Coming back to the Matrix, it had its share of technological frights. Some feared, and some saw the potential. However, this time, most do understand what technology has done to us. The elevator scene is no joke.

Are we really moving down the rabbit hole?

Every movie has a hero and a villain. Matrix had heroes to make the best use of technology. However, the world is not free of terrorists. If you have seen Iron Man, you will definitely be able to relate to what I am talking about. Create a missile for your protection, but it can work against you. Almost anything and everything can be hacked now!

Don’t get me wrong. Yes, we have entered this bizarre path of technological advancement where it almost certainly is possible. Who knows, the Matrix franchise can actually happen! However, if we could have some heroes, the world could be safe. We need Neos!

Today more people are excited due to the availability of online platforms and OTTs. Until then, nobody had thought that Apple would survive and launch Itunes just four years after the original Matrix movie launch. Time has changed, and maybe the movie wants to give us a message again.

We are not sure whether we are down the rabbit hole, and even if we are, we may find a way. Technology is a way to the future and also to destruction. We didn’t have the red pill offered to use then to know the truth of technology.

The movie will be premiered in theatres and also on HBO Max. So, finally, one can just have to wait to see what comes up next.