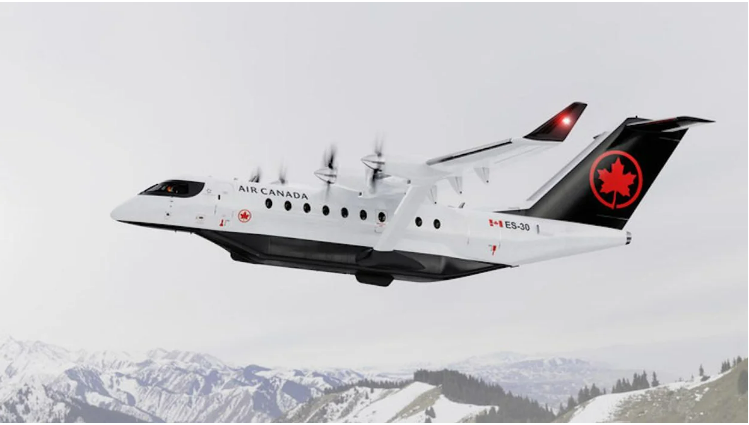 In 2021, Air Canada pledged to become carbon neutral and net zero greenhouse gases emissions by 2028. Now the company has made their efforts to meet their goals. Aircanada has decided to replace its previous 19-seat ES-19 aircraft with the latest 30 seater battery powered ES-30 aircraft. To make the deal, Air Canada has made a deal with the Swedish Startup Heart Aerospace, by investing $5 million to purchase the aircrafts. The company claims that this aircraft has zero emission as it flies on battery power.

This decision has been taken by the airtravel agency to combat climate change’s effects. As per the reports given by the Heart Aerospace, the ES-30 aircraft is powered by four electric motors that use lithium-ion battery as a primary source of power. Apart from the 4 primary motors, three are 2 additional sustainable fuel powered turbo generators as reserve. The company states that the battery of the aircraft can be fully charged within a time duration of 30 to 50 minutes.

Heart Aerospace describes that the aircraft is “reserve-hybrid configuration”. According to the company, the pair of turbo generators can be used when the aircraft travels for longer distances. The company claims that on full charge of the battery, the electric plane can easily cover a distance of 200km by touching an altitude of 20,000 feet. The Swedish company has also described that the aircraft can travel an extended distance of 400km by carrying 30 passengers, and it can even touch 800km with 25 passengers in it. The precious ES-19 aircraft also had a travelling range of about 400 km.

Throughout the years Air Canada has been supporting the development of techaviation like sustainable aviation fuel and low carbon emission fuel, to address the climate change efforts of the company. The company has become committed to invest in revolutionary aircraft technology and is seeking to make other plans in partnership with Heart Aerospace.

The Swedish heart aerospace on the other hand can be seen to make tremendous development in the ES-30 program. In January, the company successfully tested the ES-19 battery powered commercial aircraft with a 1:5 scale model. In the meantime, the company stated that it has been ground testing the electric driven aircraft for more than a year. The company is also making new offices, production houses and testing units to extend their working framework and produce more and more electric aircraft to commercial purposes.